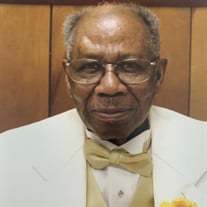 Mr. Thomas Fludd, Sr., son of the late London Fludd and Celia Goodwater Fludd was born in Mount Pleasant, South Carolina, August 26, 1927. He transitioned to his heavenly home, March 13, 2021. Thomas attended the public schools of Charleston county. He along with his siblings maintained the family land in Remley’s Point, Mt. Pleasant, South Carolina. He was joined in holy matrimony to the former Frances Pelzer at the home located at 38-B Nassau Street on November 27, 1958. They were blessed with 57 years of togetherness. Thomas branched out and gained employment with the Mayflower Moving Company as a long distance truck driver and was advanced to supervisor after taking the state board exam. Later in August 1970, he was employed by MUSC as a custodian. He studied to pass the state’s Exterminator’s Test in Columbia, SC. He was promoted to Head Exterminator, thus giving him the nickname, “The Bug Man”. He retired August 1992. He was an active and faithful member as well as the oldest member of Trinity A.M.E. Church, Mt. Pleasant, SC. He was also a member of Gothic Lodge #212, Prince Hall F. & A.M. He was preceded in death by his wife, Frances Pelzer Fludd; children, Thomas Fludd, Jr. and Celia McGinnis; and grandson, Jarvon Dowling. He is survived by his children: Betty J. Freeman (the late Joseph), Ronail Dowling (Sidney), Michael Jerome Fludd and Rosemary Tollerson; a host of grandchildren great grandchildren , great-great grandchildren, nieces, nephews and cousins; godchild, Ordean Pelzer (Sailor Boy); and a host of many other relatives and friends. Viewing will be held Friday, March 19, 2021 from 3:00 PM to 6:00 PM in the Funeral Home Chapel. Live stream for the service may be viewed on the Facebook Page for the Smith-McNeal Funeral Home

The family of Mr. Thomas Fludd Sr. created this Life Tributes page to make it easy to share your memories.

Send flowers to the Fludd family.