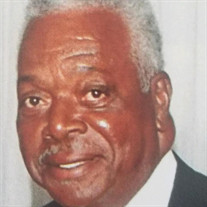 On Wednesday, September 23, 2020, Robert Lee “Bobby” Holmes, Sr. departed this earth and transitioned into a peaceful sleep with his ancestors. Robert was the fifth son, the tenth child of the late William A. and Beulah Mack Holmes. He was born on November 12, 1940 in Charleston, South Carolina. Bobby, inherited a rich legacy of faith and family values and at an early age. He was educated in the public schools of Charleston SC and later moved with his brother and graduated from Gallman High school in Newberry, South Carolina. Upon graduation, he attended Gupton-Jones Mortuary Science school in Atlanta, Georgia. Bobby was a loving son, brother, uncle, father and soldier. He served in the U.S. Navy during the Vietnam-era. On December 28, 1962, Bobby was united in holy matrimony to his former wife, Celestine (Stine) R. Holmes. This covenant was blessed with five beautiful children Robert, Selicia, Johnnie and Kescia and Quintella, who preceded him in death. Because of the spiritual values instilled in him at an early age, Bobby was baptized, converted and accepted Christ into his life. A strong faith in God and the teaching of Love and togetherness was the key to this family. In the commandment, Jesus told the disciples to "Love one another; as I have loved you" and Bobby ensured that this message was displayed in his life and instilled this commandant in his children. Bobby was always willing to help those less fortunate and in need. He lived the Golden Rule of Matthew 7:12 “ Do until others, as you would have them do unto you”. After leaving the Navy, the young couple moved from Jacksonville, Florida to Levittown, Pennsylvania where Bobby’s brother was the Pastor of St. Matthews U.M. Church in Trevose, Pennsylvania. Bobby was employed as a Skelp Mill Technician with the United States Steel Corporation in Fairless Hills, Pennsylvania. Bobby and Stine ensured that their family served the Lord with gladness. His faithfulness was shown as Bobby served as the United Methodist President, Trustee Chairperson, and the Pastor Parish Relations Committee and was an active member of the Senior Choir. He was also an active member of Prince Hall Masonic Lodge #120, in Philadelphia, Pennsylvania. He later moved back to Charleston and helped out with the family funeral home business until he lost his sight. Bobby was a member of Washington United Methodist Church and later New Francis Brown United Methodist Church. He was a member of many organizations that included the Trustee Committee, PPRC Committee, and he was a faithful member of his church and the United Methodist Men. Bobby’s favorite past time was sitting on the porch listening to his tapes and fishing, he would fish for hours sometimes catching a flock of fish, but most of the times not catching anything at all. Since he was unable to see, he used a bell on the end of the fishing rod and when that bell would ring- you knew that he got one! He would tell many about the power of his bell and his fishing rod- and he was always willing to share his “catch of day” with his family and the community. Bobby lost his sight, but that didn’t stop him from learning, sharing and teaching about the love of Jesus. “Uncle Bobby” checked on his nieces and nephews daily, sometimes calling them more than once a day, just so they knew that he loved them. Uncle Bobby kept his family laughing, he was so funny, loving, and a true man of God. He loved his children and grandchildren and was so proud of them and enjoyed telling everyone about their many achievements. Alas, he reminded his Goddaughter about this special fishing trip that he was going on. He reminded her that the bell and his family fishing rod will need to be present with him on this journey. So, the rod and bell is with him. Farewell and good night, never goodbye, sleep on our dear father, we’ll see you in the morning... He leaves to cherish his memory; his former wife, Celestine R. Holmes; beloved children: Robert (Candace) Holmes, Jr., Selicia Holmes-Langford (Timothy), Johnnie Holmes (Catherine) Kescia Holmes, and Joseph Rambert (Demetria); Sonya Mott-Edwards (Dwayne); God-daughter, Kellie R. Johnson; grandchildren Deondre Holmes, Brittany Russell, Nyemia Lawson, Olympia Belcher (Elisha), Deasia Holmes, Johnnie Holmes, Jr., Rebekah Holmes, and Sierra Holmes; great-grandchildren: LeVeah Holmes and Bryson Brown; sister, Elizabeth H. Mikell; sisters and brother-in-law: Mrs. Bettie K. Holmes, Ms. Hattie Rambert, Grace Outland, Charles Brown, Jr; and a host of nieces, nephews, other relatives and supportive friends. The relatives of Mr. Robert L. Holmes, Sr. will celebrate his life at a private graveside service on Thursday, October 1, 2020 at Carolina Memorial Park. Viewing for Mr. Holmes will be on Wednesday, September 30, 2020 from 3:00 to 6:00 PM at The William M. Smith Memorial Chapel, 2 Radcliffe St., Charleston, SC 29403. Cards may be sent to the family at 4109 Eastbury Ct., North Charleston, SC 29420.

On Wednesday, September 23, 2020, Robert Lee &#8220;Bobby&#8221; Holmes, Sr. departed this earth and transitioned into a peaceful sleep with his ancestors. Robert was the fifth son, the tenth child of the late William A. and Beulah Mack Holmes.... View Obituary & Service Information

The family of Mr. Robert "Bobby" L. Holmes Sr. created this Life Tributes page to make it easy to share your memories.

Send flowers to the Holmes family.