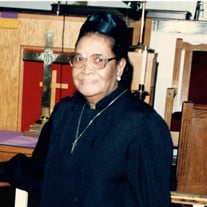 Rev. Nazarene Baldwin Graham, born May 8, 1921 to the late Reverend John H. and Lena Baldwin, was the second eldest of eight children. She distinguished herself among her siblings and peers through her humility, meekness, and obvious calling to serve others. She was virtuous, kind and patient. Reverend Graham, or “Naz,” as she is affectionately called, was educated in the public schools of Charleston County and the Baptist Religious Center under the supervision of the late Reverend Dr. B.J. Whipper. She was married for over 60 years to the late Michael Graham and had two children: Vertelle M. Middleton and Michael J. Graham. In the late 1950’s, she became among the first black female restaurateurs in the city’s historic slave market, dismantling traditional stereotypes of race and gender, when she opened “Naz’s Dinet” as a neutral space where people of all races, particularly those working on the waterfront, could feast on soul food cuisine in an atmosphere that honored their dignity and where everyone was respected as human beings. ​Reverend Graham’s Christian journey began as a child at Beard Chapel AME Church, in the city’s historic Eastside community, under the ministry of her father, Reverend John H. Baldwin. Reverend Graham worked in Beard Chapel her entire life. She served in the following capacities: Class Leader (Class #4), Sunday School Teacher, Bible Study Instructor, a member of the Boards of Stewards and Trustees, choir member, ardent fund raiser, Women’s Missionary Society member and a loving mentor for all. Reverend Graham was an anointed woman of God. She received her calling to preach in 1956. She became a trailblazer. With the support and encouragement of her mentor, the Reverend Dr. Carole B. Priester, she was licensed to preach in December 1975 and was later ordained as a Local Elder in 1984. ​Reverend Graham was also a community organizer and got involved in issues that would improve the quality of life for all residents. She was instrumental in planning and organizing voter registration drives and efforts to turn out the vote in local, state, and national elections. She was an ambassador for peace and marked her life through efforts to create unity, foster peace, and forge positive relationships during the most tenuous, turbulent periods in our city’s and nation’s history. She was a member of Progressive Chapter #310 of the Order of Eastern Stars and was a charitable giver to numerous religious and children’s organizations. For her family, Reverend Graham’s smile was the salve that mended all their wounds, hurts, and calmed their fears. She was the glue that held the family together. She was the matriarch, a virtuous woman. She was a prayer warrior and turned her house into a house of prayer where she prayed with and for countless members of the community. In life, she cast a broad net of faith undergirded with a lifetime of good works to create a solid foundation on which all who have been touched by her life can stand. Reverend Graham leaves to cherish her memories her children: Vertelle M. Middleton and Michael J. Graham (Tammy); grandchildren, Jamela Middleton Wintons (James), Reverend Dr. Kylon Jerome Middleton, Tamerin Michelle Graham, and Michael Myles Graham; great-grandchildren, Jasmine K. Wintons, Jada K. Wintons, and Kylon Joshua Middleton; special daughters, Mamie Singleton and Mary Doctor; siblings, Elizabeth Baldwin Gethers, Thelma Taylor, Benjamin Baldwin (Jeanette), and Rose B. Washington; and a host of nieces, nephews, other relatives and friends. Funeral: Saturday, September 7, 2019 1:00 PM at Ebebezer AME Church 44 Nassau Street, Charleston, SC 29403. Entombment: Sunset Memorial Garden Vieiwing: Friday, September 6, 2019 3:30-5:30 PM @ The William M. Smith Memorial Chapel 6:00-8:00 PM @ the church, where the family will receive friends.

Rev. Nazarene Baldwin Graham, born May 8, 1921 to the late Reverend John H. and Lena Baldwin, was the second eldest of eight children. She distinguished herself among her siblings and peers through her humility, meekness, and obvious calling... View Obituary & Service Information

The family of Rev. Nazarene Baldwin Graham created this Life Tributes page to make it easy to share your memories.

Send flowers to the Graham family.