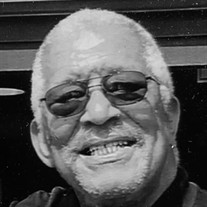 Milton Julius Moore was born in Harlem, New York on May 29, 1939, to Ruth Ann Pressley Moore and Jack Charles Moore. He was the 7th of 10 beloved children (7 girls and 3 boys), eight siblings of whom preceded him in death. He was educated in New York City public schools. At about 18 years old, he left home and enlisted in the Air Force to see the world. Upon returning home, he worked as a bank teller. In 1962, he married Audrey Weaver, the love of his life. They moved to Charleston, South Carolina where he worked as a manager, supervisor, and maitre’d at many restaurants. He was also employed as a car salesman at many dealerships such as Parker Pontiac, Century Buick, and McElveen Motors for over 30 years until retirement. Milton was known for his witty, carefree, and spirited nature. He was extremely adventurous, outgoing, and friendly. He loved to cook and was a great chef. He also loved to sing and tell jokes. He was a very debonair and distinguished gentleman. As a music lover, he would listen to anything from big band, old school latin, jazz, and Motown music. He is survived by 4 children, Adreene Allen of Dunwoody Georgia, Michael Moore (Suzanne) of Griffin, Georgia, Kevin Weaver (Wilma) of Bronx, New York, and Milton Attles Moore of Cary, North Carolina; 6 grands; 2 great-grands; sister. Lillian Moore of New York City; special niece, Lillette McCormick, sister-in-law, Dorothy W. Green, and a host of other nieces, nephews, cousins, friends, neighbors, and colleagues. After an extended illness, Milton Moore passed away on March 28, 2021, at his residence in Charleston, South Carolina. He left too soon. We love you and will miss you but God loved you more. You are now with our greater family. Rest in peace until we meet again. Live streaming of the service may be viewed on the Facebook Page for the Smith-McNeal Funeral Home: https://fb.watch/4IeFjihBYz/

Milton Julius Moore was born in Harlem, New York on May 29, 1939, to Ruth Ann Pressley Moore and Jack Charles Moore. He was the 7th of 10 beloved children (7 girls and 3 boys), eight siblings of whom preceded him in death. He was educated... View Obituary & Service Information

The family of Mr. Milton Moore created this Life Tributes page to make it easy to share your memories.

Send flowers to the Moore family.