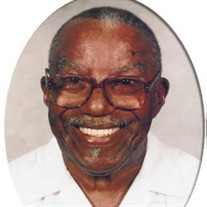 MARION SIMPSON DIXON DECEMBER 31, 1922 – FEBRUARY 10, 2021 Marion was born in Charleston, SC, on December 31, 1922 to Elijah Dixon and Sammy Belle Spencer. While serving in the Navy, he met and married Louise Haskell, they had two daughters and the family moved to New York City in 1954. Marion worked at Morrisania and Kings County Hospitals. When Marion retired, he returned home to Charleston. He immediately rejoined his childhood church, St. John’s Reformed Episcopal Church, and served on the Usher Board for many years. Marion served his country during WWII, serving on the USS Chenango in both the Atlantic and Pacific theaters, and notably, the Battle of Leyte Bay - the largest Naval battle of the war. He served with honor. Marion was a cook – his favorites were pork chops and collards. His peach cobbler and sweet potato pie were family favorites. Every year when he visited his daughters in New York, he spent days baking pies and cobbler. When you tried to alter his tried and true recipes, he would admonish and say, “go back and follow the recipe.” Marion was always happy at a card party – Spades or Bid Whist. He was known to travel far and wide to put his numbers in – by the way, those numbers are 140, 250, 427, 307, and 122. Marion will also be remembered for his sense of humor, calling the arthritis in his back respectfully – Mr. Itis, hoping that by showing respect, Mr. Itis wouldn’t be so painful. His grandson asked him why he joined the Navy since he couldn’t swim; with a straight face, he said, “I loved the uniforms.” Family in Charleston lovingly called him Uncle Bootsie. A nickname given to him as a child by his grandmother, Nancy Spencer. While Marion would complain it was cold on a 90 degrees day, at 98, he was sharp as a tack. When he wanted to hear you, he could talk for hours about any and everything. He lived independently until the very end. He is survived by his daughters, Nancy Ashon Poku and Sherry Powell; grandchildren, John H Talley III, Denise L. Talley, Robert Talley, PaaKwesi Ashon, Grishae Blackette, Naana Logan and Anika Coaxum; great grandsons, Blair Talley, Jarrod Talley, Malik Thompson, Jackson Talley, Spencer Talley, and Mason Sturdivant; his loving niece (daughter) and her husband, Vera and William Singleton and nephew and his wife, Marvin and Vicky Coaxum and a host of nieces and nephews and caring friends. He will surely be missed and never forgotten. The relatives of Mr. Marion S. Dixon will celebrate his life at a Private Funeral Service on Saturday, February 20, 2021 at the Smith-McNeal Funeral Chapel. Interment: Monrovia Cemetery Viewing for Mr. Dixon will be on Friday, February 19, 2021 from 4:00 to 6:00 PM at the Smith-McNeal Funeral Home, Inc., 2119 Dorchester Rd., North Charleston, SC 29405. In lieu of flowers, the family requests donation be made to the Restoration Fund of St. John's Reformed Episcopal Church, 91 Anson St., Charleston, SC 29401. The live stream service for Mr. Dixon may be viewed at: https://www.facebook.com/kingdomgrafixbyty/

MARION SIMPSON DIXON DECEMBER 31, 1922 &#8211; FEBRUARY 10, 2021 Marion was born in Charleston, SC, on December 31, 1922 to Elijah Dixon and Sammy Belle Spencer. While serving in the Navy, he met and married Louise Haskell, they... View Obituary & Service Information

The family of Mr. Marion S. Dixon created this Life Tributes page to make it easy to share your memories.

Send flowers to the Dixon family.