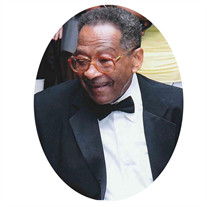 Jessie Dingle, Sr., was the widower of Louistein Jefferson Dingle, who preceded him in death in 1974. He died peacefully surrounded by family on Thursday, April 23, 2020. He was the son of the late Thaddeus McNeal, Sr. and Ida Ravenel. Jessie was raised in Awendaw, South Carolina and attended Charleston County Public Schools. He was the native son of the LowCountry. His brothers and sisters who preceded him to death were: Thaddeus McNeal, Jr., Rev. Bryan McNeal, Sr., Margaret McCourty, and Eartha Lee Robinson. His remaining living sisters are: Susie Ravenel, Elnora Hamilton and JoAnn Ravenel. He has one sister-in- law: Loretta McNeal. He was joined in matrimony to Louistein Jefferson and from their union, God blessed them with many years of love, happiness, devotion and the births of seven beautiful children: four sons, Curtis, who preceded him to death, Jessie, Jr., Gregory and Jeffery and three daughters, Lavern, Vi Ann, and Angela. A distinguished, highly-admired, respected man of integrity, Jessie was dedicated to his family, work and church. He was recognized throughout the LowCountry as a kind and generous man. He taught his children the value of hard work, and he made many sacrifices so that his children would grow up to become strong, independent, self-sufficient men and women. Jessie dedicated his life to the Lord at an early age. His faith and trust in God was profound and everlasting. He was an active member of St. John’s Reformed Episcopal Church. There he served faithfully, with distinction as a class leader for many years. His life is a testimony of a true Christian man who truly loved and served the Lord. He also was a watch care member of his family church Mt. Nebo A.M.E in Awendaw, SC. He worked for several decades at Bluestein’s Menswear where he retired in 2003. His hobbies included singing, and baseball. He gained his appreciation for fashion while working at Bluestein’s Menswear and because of love for fashion, he was known to be a nattily dresser. After retirement, he became employed at Superbad Menswear as a sales employee and consultant. Hundreds of men and boys were outfitted with his meticulous color scheme and style. His greatest joy was being in the presence of his family and friends. His prowess as a cook was renowned. His love for food translated into him owning and operating, Jessie, Jr.’s Snack Bar. In the early 1970’s, he led and managed the gospel group The Rolling Stones, where they traveled all over the LowCountry for singing programs. He hosted a gospel radio segment on Sunday mornings with WPAL radio station. He was a member of the Civic Community Club. The relatives of Mr. Jessie Dingle, Sr. will celebrate his life at a private funeral service on Saturday, May 2, 2020. Interment: Mt. Pleasant Memorial Gardens. Those left to cherish Jessie’s memory are his sons: Jessie Dingle, Jr., of Mt. Pleasant, SC, Gregory Dingle of Columbia, SC, and Jeffery Dingle (Karen) of North Charleston, SC. His Three daughters, Lavern Capers (Harold), and Vi Ann Alston (Jackie) both of Mt. Pleasant, SC, Angela Dingle of Charleston, SC, Glendora Jefferson, Daughter-In-Law of Goose Creek, SC, and three sisters Susie Ravenel, Elenora Hamilton both of Charleston, SC, and JoAnn Ravenel of Jamaica, New York. He have two God Daughters: Sylvia Mc Duffie and Evangelist Patricia Wright. Seven Grand Children: Marvin Scriven, Julisa Williams, (Travis) Paisley Dingle, Curtis Jefferson, Jr., Tyler Capers, Hale’ Alston, and Donnavan Jefferson. Six Great Grand Children, two Sisters-In-Law Lucille Jefferson, and Loretta McNeal as well as, a host of nieces, nephews, cousins, and life-long friends.

Jessie Dingle, Sr., was the widower of Louistein Jefferson Dingle, who preceded him in death in 1974. He died peacefully surrounded by family on Thursday, April 23, 2020. He was the son of the late Thaddeus McNeal, Sr. and Ida Ravenel. Jessie... View Obituary & Service Information

The family of Mr. Jessie Dingle Sr. created this Life Tributes page to make it easy to share your memories.

Jessie Dingle, Sr., was the widower of Louistein Jefferson Dingle,...

Send flowers to the Dingle family.