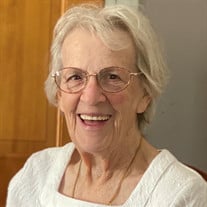 Iris Lee Carson née Wilson of Charleston left her earthly body early on the morning of Wednesday, December 30th in her home, under the loving care of her family. She was eighty-two. Iris was born May 24, 1938 in Wilmington, Delaware, the first child of Alex Wilson of Rapid City, South Dakota and Jessie Partlow Wilson of Sundance, Wyoming. As a child, she enjoyed exploring the city with her sister and traveling out west to visit her grandparents. She attended P.S. DuPont High School, earned a degree in education from the University of Delaware, and began a career as an elementary school teacher. In 1963 she met and married William “Bill” Carson of Methuen, Massachusetts. They started a family in Wilmington, where she gave birth to Marianne, Beth, Kelly, and Karen. In 1969 they moved to Baltimore, where two more children, Melissa and Billy, were born. In 1987 Iris moved with her family to Charleston, and soon found her spiritual home at St. Stephen’s Episcopal Church on Anson St. For over three decades she served the congregation in many capacities, including parish coordinator, eucharistic minister, and Sunday school teacher. In addition to her joyful work for her parish, she was involved with the Charleston Area Justice Ministry and was a regular volunteer at Interfaith Crisis Ministries/180 Place. In 2010 she joined the Society of the Companions of the Sacred Heart. Iris enjoyed visiting new places, attending concerts, watching the birds in her backyard, and most of all spending cherished time with her many grandchildren, near and far. She was preceded in death by her parents, her sister Margaret and brother George, and her husband of 54 years, Bill. Iris leaves a legacy of six children: Marianne Austin, Beth Hammer, Kelly Jenkins, Karen Eichman, Melissa Pound, Billy Carson, and their spouses; twenty grandchildren; two great-grandchildren; many dear in-laws, nieces, and nephews; and countless friends she touched with her love along the way. A service will be held at St. Stephen's Episcopal Church when it is safe to do so. In lieu of flowers, the family requests that her memory be honored by making donations to local organizations that help those facing social injustice: 180 Place, CAJM, and Magdelene House of Charleston.

Iris Lee Carson née Wilson of Charleston left her earthly body early on the morning of Wednesday, December 30th in her home, under the loving care of her family. She was eighty-two. Iris was born May 24, 1938 in Wilmington, Delaware, the first... View Obituary & Service Information

The family of Mrs. Iris Lee Carson created this Life Tributes page to make it easy to share your memories.

Send flowers to the Carson family.