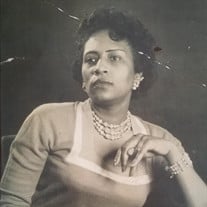 Flo Meyers Ms. Flossie Alethia Meyers-White was born August 4, 1925. The daughter of Edward Meyers and Belle Patterson Meyers joined her heavenly family on Saturday, February 13, 2021, at approximately 3:20 p.m. “Flo Myers” attended the Immaculate Conception School and graduated from Avery Institute in Charleston in 1945. She further studied at Prairie View A&M University in Texas. She was an active member of Emanuel AME Church in Charleston for many years. Flo’s passions were singing, speaking, serving the community and praising her God. “Trailblazer” Flo was blessed with a beautiful voice. In the 1950’s, she performed on the popular “Talent Parade” TV show hosted by D. Jack Moses on WCSC Channel-5 in Charleston, after which she was labeled the “Second Sarah Vaughn of the South”. She left the area to live in New York City for a number of years but it was while she was on a home-visit in Charleston that local legendary disc-jockey, Bob Nichols, heard her singing at a club, loved her voice, and encouraged her to become a radio announcer. She went on to become the first FCC licensed female radio announcer in South Carolina. In 1961, Flo was hired by WPAL-AM radio station and became the area’s first female radio disc-jockey, with a listening audience that spanned across the Charleston low-country and some other areas of SC, Georgia and Florida. Listeners across generations knew her as the Lady-DJ on WPAL whose hook was: “Have mercy, baby!” She later received the “Radio Pioneer Award” from the SC Coastal Association of Black Journalists. Baby Boomers may also remember Flo from the record-hop circuit of the 1960’s and 70’s where Flo Myers and Bob Nichols with Frankie the Big Bopper on drums were all quite popular. In 1972, Flo was invited to perform as the featured DJ at the famous Audubon Ballroom in New York. After 13 years on the air at WPAL, Flo left and pursued a career in sales at Ferneau Buick Car Dealership where she was their first female sales person. At Ferneau, she received numerous awards for Sales Person of the Month. Indeed, Flo Myers was a true trailblazer for women in the generations to come. “Woman of Service” Flo was a long-term member of Emanuel AME Church where she was a member of the following organizations: Junior Trustee Board, the Mortgage Club, Usher Board #3, the Choir, and Hostess at the 7am service on Sundays. She was affiliated with Progressive Chapter #310, Order of the Eastern Star. She was also often engaged by the community to serve as a panel-judge for local talent shows and beauty pageants. Family Flo was predeceased by her parents, Edward and Belle Meyers and her son, Dean Anthony White. She leaves to mourn her son, Bernard White; her daughter-in-law, Cecelia White; and her grandchildren, Bernard Alvin White, Dean Anthony White and Chelsea Odell. She also leaves to mourn her dedicated cousins, Alfreda E. Jenkins, Veronica Rogers, Bernadette Scott, Alice Brown and Lavinia Bowman; her dear friend, Doris Coaxum; her “adopted son” Rodney Lewis; her goddaughter, Khala Ellis; and a host of loving family members and friends. All who knew Flo felt blessed by her loving spirit, her outgoing personality, and her unique sense of style. Indeed, the Lady Legend lives on. Ms. Flo Myers will be one of the local icons of Women’s History and Black History in the low-country area for many years to come. Viewing for Mrs. Meyers-White will be on Friday, February 19, 2020 from 4:00 to 6:00 PM at Smith-McNeal Funeral Home, 2119 Dorchester Rd., North Charleston, SC 29405.

The family of Ms. Flossie "Flo" Meyers White created this Life Tributes page to make it easy to share your memories.